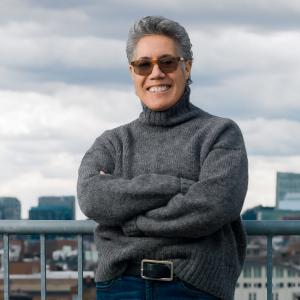 Born in Michigan but raised on the West Coast of the United States and in Buenos Aires, Argentina in a bilingual, bicultural family, Cristina Kotz Cornejo is also a descendant of the Indigenous Huarpe people of the Cuyo region of Argentina and an enrolled member of the Comunidad LOF Vicente Catrunao Pincén. Cristina received a M.F.A. from New York University’s Tisch School of the Arts, a M.A. in Organizational Arts Management from Antioch University and a B.A. in International Relations from the University of Southern California.

3 Américas (2007) was Cristina’s feature film debut loosely based on her own adolescent years. The film has screened around the world, from Mexico City to Montevideo, Uruguay to New York City. 3 Américas was in the official script competition (as Soledad) at the 2003 International Festival of New Latin American Cinema in Havana, Cuba. She was invited to attend the Sundance Institute’s 2004 Independent Producer’s Conference with 3 Américas (as Soledad). 3 Américas was distributed by Vanguard Cinema and Film Buff, streamed on Netflix when it was first released and can now be found as a DVD here on Netflix. Her short film, La Guerra Que No Fue/The War That Never Was (2004) screened at over 25 national and international festivals in over 10 countries and was distributed by OUAT! Media. Her shorts, Despertar (2011), Hermanas (2013) and Buena Fé (2014) have played festivals around the world.

In 2000 she was commissioned by the Partnership for a Drug Free America to direct, Ernesto (2000), which premiered at the Palm Springs International Short Film Festival in August of that same year. Her short film, The Appointment (1999), developed under the advisement of Spike Lee, Nancy Savoca and Pascal Aubier while a student at NYU, was awarded a Warner Brothers Pictures Production Award, a Dean’s Post Production Award, and 3 NYU Craft Awards and was picked up for distribution by Urban Entertainment in Los Angeles. In 1999, Cristina was awarded an Independent Vision Grant from the Independent Feature Project to direct Off to College I Go! (1999), a 2 minute short which premiered at the Film Forum in New York City as part of the Classically Independent Film Festival. Her documentary short film, Jewel and The Catch, about African American LGBTQ activist, Jewel Thais-Williams was selected by Outfest to be part of the Outfest UCLA Legacy Project of UCLA's Film and Television Archive. Excerpts from Jewel and the Catch can be seen in the opening credit sequence of season 3 of the Amazon series, Transparent.

Cristina is the recipient of 2004 & 2007 Moving Image Fund Grants from the LEF Foundation in support of 3 Américas and is a recipient of a 2020 Journalism360 Challenge Grant from the Online News Association and the Knight Foundation. She is also a 2010 Film Independent Project Involve Fellow, a 2012 MacDowell Colony Fellow, a 2013 Massachusetts Cultural Council Artist Fellow and 2014 Cine Qua Non Screenwriter Fellow.

Cristina is also contributing author in Filming Difference: Actors, Directors, Producers and Writers on Gender, Race and Sexuality in Film, University of Texas Press (edited by Daniel Bernardi); May 2009.

Cristina currently has a feature length screenplay and a Virtual Reality/Mixed Reality experience, Magic in the Desert, in development, a personal documentary in post production and a 360º film, “the root is more important than the flower/la raíz es mas importante que la flor” and is an official selection at the Indigenous 2021 Asinabka Film & Media Festival in Canada, the 2021 Aesthetica Film & Media Festival in England, the 2021 Virginia Dares Cinematic Arts Award for Decolonizing & Re-Indigenizing Media at Virginia Tech University, the Cinequest FIlm and Creativity Festival’s VR Competition and the FICWALLMAPU, the Indigenous Film & Arts Festival in Temuco, Chile.

In 2014, Cristina was promoted to Full Professor in the Department of Visual and Media Arts making her the first Latina Full Professor of Media Production in the US. She is currently the Chair of the department. Cristina is the recipient of the Mann Stearns Distinguished Faculty Award, the 2019 American Spirit Award for Special Achievement in Educating New Filmmakers from the Caucus for Producers, Writers, Directors and VARIETY’s 2021 Educator of the Year.