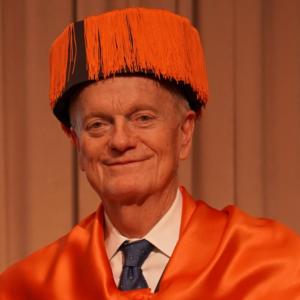 Dr. J. Gregory Payne is Chair of Emerson College's Department of Communication Studies, the first communication department in the United States. He is the Co-Director of the Emerson Blanquerna Center for Global Communication and received an “Honoris Causa” from the Blanquerna School of Communication and International Relations, University of Ramon Llull in Barcelona in the fall of 2019 for his lifelong distinguished academic and professional career.

In addition, Payne has taught at Yale and Tufts University as well as Occidental College. Dr. Payne received his B.A, M.A. and Ph.D at University of Illinois at Urbana-Champaign where he was Phi Beta Kappa and a Big Ten Traveling Scholar where he studied at the University of Wisconsin- Madison and a special scholar program at the University of Southern California.  He earned an MPA from the Kennedy School of Government at Harvard University.  He is the co-author of Tom Bradley: The Impossible Dream, Mayday: Kent State, the play Kent State: A Requiem, and has authored academic and popular articles and book chapters for publications worldwide. He has lectured internationally on topics related to political communication, public diplomacy, health communication, media, ethics, leadership, negotiation, crisis and risk communication, and political and social movements. After writing the first dissertation on the shootings at Kent State at Illinois, he is a noted expert on the May 1970 tragedy and its aftermath. He directed three, global conferences on Celebrity/Spectacle on the aftermath of the death of Princess Diana, and has continued to highlight this issue in politics as well as the infatuation with the British Royal Family. He is on the Advisory board of the Journal of Health Communication, Tripidos, American Behavioral Scientist, Media Ethics, Journal of Promotion Management, among others. Dr. Payne has served as Editor for American Behavioral Scientist’s special edition on the U.S. presidential campaign for every election since l988. He is past President of the International Academy of Business Disciplines, past chair of the Political Communication Division of the National Communication Association, Executive Advisory Board member of the Global Communication Project, and the Academic Director of the global Team Harmony Project dedicated to eradicating hate.

Dr. Payne received the Robert F. Kennedy Award for Public Service, the first University of Illinois’ Speech Communication Alumni Award, the NCA Humanitarian Award, honors from the US Treasury, UNICEF, Formula One Racing, Friends of the Majestic Theatre, and the President’s Award, and the Lifetime Achievement Award from the International Association of Business Disciplines. He received grants from the U.S. State Department and the National Republican Institute, among others.  He is a Schweitzer Fellow in health communication.  He is a frequent source for print and electronic media outlets including USA Today, The New York Times, The Washington Post, The Boston Globe, Los Angeles Times, Chicago Tribune, Newsday, CNN, Fox News, Sky News, MSNBC, Arab News, BBC, ABC, CBS and NBC (television and radio).