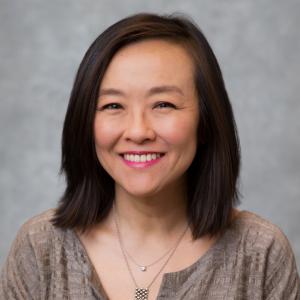 Jun Okada is a scholar of film and media studies who focuses on the connections among institutions, race, politics, and aesthetics in media. Originally from California, she comes to Emerson from SUNY Geneseo, where she was Associate Professor of English and Film Studies. She earned her MA and PhD in Cinema and Media Studies at UCLA and her BA in English literature at UC Berkeley. She has published articles and reviews in the Journal of Cinema and Media Studies, Screen, Film Quarterly, and The Velvet Light Trap, among others. Her book, Making Asian American Film and Video: History, Institutions, Movements (Rutgers UP, 2015), explores how the Asian American film and video movement emerged in the 1970s from a need to address marginalization and lack of representation. It argues that funding institutions like PBS and the Corporation for Public Broadcasting profoundly affected the transformation and growth of independently produced Asian American film and video, in both positive and negative ways, as it pertains to the construction of race, diversity, and inclusion in the televisual public sphere of the late 20th century. In her career, she has participated in the NEH Summer Institute at UCLA (2015), the Fulbright-Hays Bilateral Projects Seminar Abroad in China (2013) and has served as a Fulbright Scholar in Residence at Lisbon Theater and Film School (Escola Superior de Teatro e Cinema), Portugal in 2019. At Emerson, Dr. Okada teaches courses on race and media, global cinemas, and film history and theory.