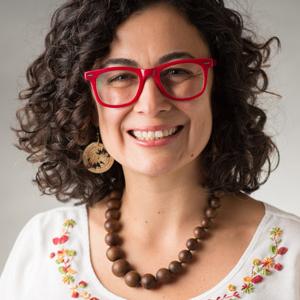 Lina Maria Giraldo is a Colombian-born, Boston-based, designer, interactive media artist, and storyteller with a background in Co-design, Civic Media, Data, Art, and Technology. Currently an Assistant Professor at Emerson in the Journalist Department.

Giraldo focuses on interactive storytelling for social change through a diverse body of work, ranging from digital educational tools, grassroots storytelling, public installations, and screen-based computer-generated work. Through the power of collective storytelling, her works explore questions related to identity, including a focus on Latino and Haitian experiences in the US; the environmental impact of consumption including projects focusing on e-waste, the use of plastics, and the extinction of birds. Over the last 20 years, her work has focused on creating messages that portray the fragility of our environment, community, equality, and immigration concerns. She likes to think of her work as a visual tool with an educational and civic purpose.

Her achievements include being a Journalist in Residence at Emerson College, an Artist in Residency for the City of Boston (Boston AIR 2.0), a recipient from Now + There accelerator program for creating Public Art at the City of Boston, and the receiver of the Creative City Grant. She was part of the award-winning educational website JFK50.org team while working as an Interaction Designer at ESI Design. Professor Giraldo is also the recipient of the Hispanic Scholarship Foundation Grant. Her most notable interviewees are Madeleine Albright, Stephen King, Harry Belafonte, and Nancy Pelosi for the JFK Library.

Professor Giraldo holds a Master of Professional Studies in Interactive Telecommunications (ITP) from Tisch School of the Arts at New York University, where she received the Paulette Goddard and Tisch School Scholarships. She was also awarded the Tsongas Scholarship at Massachusetts College of Art and Design. Her work has been covered in various media, including The Boston Globe, ABC News, The Artery, Artlink, WBUR, WGBH, and NPR.