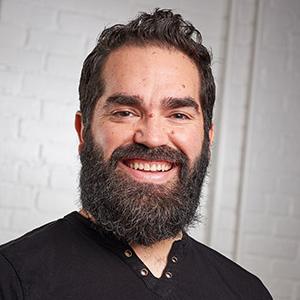 Nathaniel (Natty) Justiniano is an actor, deviser, director, and movement designer. He is the founding Artistic Director of Naked Empire Bouffon Company, through which he has toured North America with original works that use outrageous satire to interrogate our social and political climate. As an actor, he has performed with Shakespeare Orange County, Son of Semele Ensemble, Cornerstone Theater Company, The Dell'Arte Company, Thrillpeddlers, Cutting Ball Theater, and We Players.

Hired through the Presidential Faculty Inclusive Excellence program, Justiniano teaches courses in Performing Arts and the Comedic Arts program. Prior to joining Emerson, he taught at the San Francisco Clown Conservatory, Kinetic Arts, and Sacramento City College. He has served as Movement Designer for UC Berkeley's TDPS department, and as the Director of Physical Comedy for the Sacramento Shakespeare Festival.