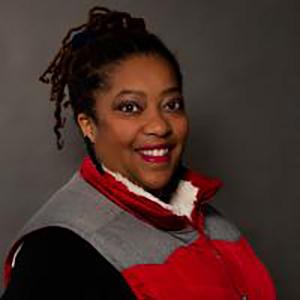 Mrs. Williams Scott – CEO/Lead Creative Producer of That Child Got Talent Entertainment, Boston, MA (tcgtentertainment.com) was the Night Manager of the Emerson College Paramount Film Sound Stage for 12 years before recently joining the affiliated faculty in the Marketing Communications department.  She is a graduate of Hampton University, where she received a Bachelor of Art degree in Fine and Performing Arts.  She is also a graduate of Emerson College where she received her Master of Fine Art degree in Film Production ’15 (emphasis on producing).  Her career experience includes over thirty years of working and learning in the Performing and Media Art avenues of entertainment.

She has worked her way up to the position of Producer, Creative Producer, UPM and Line Producer.  She has produced and served as production manager for a variety of Live events, theatre productions, Fashion films, TV series, Documentaries/series, Narrative features & shorts and Music videos.  Her world travels have set her apart in the Creative Producer role.  She was awarded the LEF Foundation Fellowship to attend the Flaherty Seminar in upstate New York in 2018 as well as the LEF Development grant for the experimental feature documentary, “Paradise” with director Gabby Sumney.  She, along with director Daniel Callahan, has produced a feature thriller narrative, "Come On In", showcasing in festivals across the globe.  Her producing passion project, "Our Circuit", is a docu-series centered around the themes of the understanding of the African American entertainment conglomerate known as the Chitlin Circuit.

She sits on the Board of Directors for Women in Film and Video New England. She also sits as the Chair of the Events and Programming Committee for the Board of Directors of Women in Film and Television International.  Her most prized position is serving as the Creative Director of Sarah’s Hope Charitable and Educational Foundation in Lufkin, Texas.  As CEO of That Child Got Talent Entertainment, Nerissa has created a company that serves as a bridge for women who are recent college grads to gain employment while serving the greater community through teaching youth as well as elders. Her favorite quote, “The ongoing forward momentum of TCGT has provided the avenue that lays poise for the women we provide the opportunity to wow the world with brilliance!”