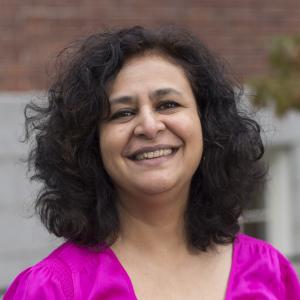 Tulasi Srinivas is a Professor of Anthropology, Religion and Transnational Studies at The Marlboro Institute for Interdisciplinary Studies at Emerson College. Srinivas is a fellow of the Royal Asiatic Society and the Indian Sociological Society.

Srinivas has delivered several dozen invited talks on her research in a range of scholarly, policy and popular venues across the US, Denmark, France, Germany, Italy, India, New Zealand, Singapore, Spain, Switzerland, and the United Kingdom. She was the keynote speaker at the annual meeting of the New Zealand and Australia Religion Association, the Zentrum für interdisziplinäre Forschung (ZIF), Germany; and the World Bank’s Human Development Forum. Srinivas has also been an expert with the World Economic Forum on matters of faith from 2010 to 2015 and was part of the WEF Davos summit from 2005 to 2010.

She is an award-winning teacher, most recently the 2015 Helaine and Stanley Miller awardee for teaching excellence at Emerson College.

Srinivas is a decorated author and editor of 6 books  and over 30 award winning journal articles and book chapters. Her books include Winged Faith Rethinking Globalization and Religious Pluralism (Columbia University Press 2010), the award-winning Curried Cultures: Food, Globalization and South Asia, (University of California Press, 2012 and Aleph press 2017, Indian edition), The Cow in the Elevator: An Anthropology of Wonder (Duke University Press Spring 2018) and Wonder in South Asia: Politics, Aesthetics, Ethics (SUNY press forthcoming). She is currently working on a manuscript on religion, climate change and ecological degradation titled The Missing Goddess: Religion, Ecology and Violence in a Millennial City for which she won the LUCE-ACLS Fellowship in Religion, Journalism and International Affairs. Her work combines multiple methods including comparative historical, ethnographic, and experimental analyses. Her research has won numerous prizes across the disciplines of Anthropology, Religious Studies and Sociology.

Srinivas has held several prestigious fellowships; at the Center for the Study of World Religions at Harvard University (2002), the Berkley Center for Religion, Peace and World Affairs at Georgetown University (2006-2007) and at the Kate Hamburger Kolleg, Bochum, Germany and the Radcliffe Institute for Advanced Study at Harvard University (2016-17). Her research has been supported by the NEH, The Pew Foundation, The Amelia Earhart Foundation and the Rockefeller Foundation, and has appeared in The Boston Globe, Religion News Network, CNN, The Washington Post, NPR, WNYC, WBZ-news, The Arlington Advocate, The Immanent Frame, The Conversation, and Scroll.in.

Srinivas is an advisor to the Bangalore city study group to the non-profit Jaaga in Bangalore that deals with conflict over land in the city. She is part of the team of experts to the World Economic Forum, Davos, on the Global Agenda Council on The Crisis of Global Inequality.