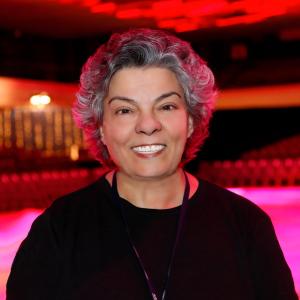 Aida Moreno is an award-winning producer and co-founder of Moreno/Lyons Productions (MLP), a Boston-based independent production company.  She was born in northern Portugal, immigrated to America at age 6 and started working in television at age 17 at WGBY, the public television station in Springfield, Mass.

One of the most prolific producers in public television, she has more than three decades’ worth of production, management and budgeting experience and a long track record of creating successful primetime programs and series. Though best known as the creator and original Executive Producer of the long-running PBS hit series Antiques Roadshow, she has worked on a wide variety of programs during her long career at WGBH/Boston and with her production company.

Moreno began her television career at WGBH as a production assistant and associate producer on programs ranging from Julia Child and Company to Evening at Symphony, then broke into the producing ranks with Championship Ballroom Dancing, which went on to become one of the most popular annual specials on PBS for more than 20 years. The ballroom community recognized Moreno’s contribution to the sport in 1999 by inducting her into the World Dance Hall of Fame, and again in 2007, when she was inducted into the United States Dancesport Hall of Fame.

Specializing in large-scale, multi-camera event shows, Moreno has also produced political programs such as Candidates ‘88, a series of live interviews of the presidential candidates, hosted by Marvin Kalb; programs on public issues such as Condition Critical: The American Healthcare Forum, with Phil Donahue, and Getting the News in the 21st Century, with Ted Koppel; and a number of successful PBS pledge specials, including Big Band Ballroom Bash, The Jewel in the Crown Salute and two Masterpiece Theatre’s anniversary specials. She also produced an award-winning documentary and concert Let The Good Times Roll, on blues guitarist B.B. King.

In 1993, Moreno was asked by WGBH to assist the producers of a longtime BBC program called Antiques Roadshow. She returned from England convinced that an American version of the appraisal show could succeed. Over the next three years, she developed a new format, budget and production plan for a retooled version of the British series.She helped secure corporate support for the series, worked with consultants in the antique community to select hundreds of appraisers, created an “appraiser school” to train them to serve as the show’s storytellers, and took on the logistical challenges of creating a touring show that would span the nation. Moreno served as original producer and executive producer as she and the Roadshow team visited more than 35 American cities. Under her leadership, the program became a cultural phenomenon and one of the most successful series in PBS history.

When Moreno decided to hang up her shingle and form Moreno/Lyons Productions (MLP) with partner Stephen Lyons, new productions kept the company humming. Among other shows, the company has produced more than 20 primetime hours for PBS, including five seasons (so far) of a new competition dance program called America’s Ballroom Challenge.

Moreno served as Senior Production Executive for The Mystery of Matter: Search for the Elements, MLP’s Emmy Award-winning 2015 PBS documentary series about the amazing human story behind the Periodic Table.

She is currently working in the same capacity on Across the Pacific, a forthcoming three-hour public television documentary series about the events leading up to Pan Am’s epochal 1935 crossing of the Pacific Ocean in the China Clipper. Moreno is also developing two new television projects – a cooking show with a unique twist and a program on crafts.

Moreno is a member of the Academy of Motion Picture Arts and Sciences, the Writer’s Guild of America, East and the Filmmakers Collaborative.

A small sample of some of Moreno’s work: