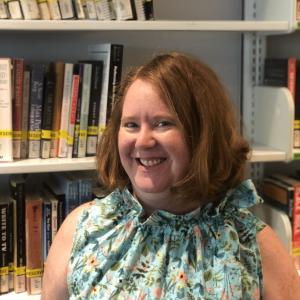 Cheryl began her academic library career at Emerson College in 1996 at 150 Beacon Street.  Moving the library to the current location in the Walker Building gave her the experience she needed moving library collections to take a job at Stanford University in 2001. While at Stanford, Cheryl oversaw the opening of a high-density library storage facility with 30 foot high shelving. She designed all the workflows to move and retrieve materials, trained to use a forklift and electric walkie, and was sorely disappointed when she discovered that had the facility been built with 40 foot high shelves, her forklift training would have included rappelling from a forklift stuck in the highest position. While at Stanford, Cheryl also worked on a side project called Google Books.

In 2007 Cheryl returned to the Boston area to work at Havard University's Widener Library where she created three different software applications to improve patron experiences. Yale and Stanford developed her applications for their own libraries. After a dozen years behind the scenes at R1 libraries, Cheryl missed the connections with faculty and students similar to what she had at Emerson, and took a job as the library director at Stonehill College.

At Stonehill, Cheryl helped faculty create a Digital InnovationLab.  She also became an affiliated member of the Berkman Kelin Center for Internet and Society at Harvard University.  Eventually, Cheryl decided that she missed the actual Emerson, and became the Executive Director for Library and Learning 23 years after she first arrived on Emerson's doorstep.

One of the things Cheryl is most proud of is all the fines programs she cancelled at various institutions.  She considered overdue fines to be nuisance fines that impede equitable access to materials.  Her passions for access has led her to champion reserves and scanning programs, metatadata creation, information skills, digitization projects, and diversifying collections.

Cheryl is happy to talk to you about books, media, and supporting artists, transracial adoption, neurodiversity, Buy Nothing Project, and Florida springs. You should also ask her about her handstand theory.

In the chapter we outline two different innovation projects using the layers of interoperability to retroactively assess how the innovation was achieved.  Both of these projects, Inscriptio and Secure Exit, have at heart the desire to simplify services delivered to patrons, in a way that is effective from the perspective of both staffing models and patrons' experience.  McGrath and Warren.