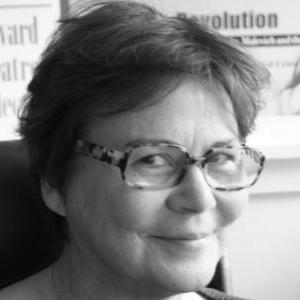 A cultural historian with an area specialty in Soviet studies, Dana Howell came to Marlboro in 1985 to help build the new World Studies Program. She directed the program for five years, and helped Marlboro students, across the curriculum, take on internships all over the map. She also directed the first Marlboro Asia Project, with support from the National Endowment on the Humanities, and helped to add faculty in international studies. Dana taught area courses in Eurasian studies and courses on contemporary topics like war reporting, tourism and public culture.

In her classes, Dana looked at contemporary life through the lens of cultural traditions and history. “I’m interested in situations where people see their lives as part of large events and changes, where they are thinking about the connection to history,” she says. “This must explain my fascination with Soviet and post-Soviet societies.” Dana prefers using primary materials, which offer students an immediate exposure to cultural perspectives and invite further reading. “I like a recent comment by a British historian, ‘I read until I can hear the people talking.’” Dana’s international perspective allowed her to work with Plan students on a broad range of topics, from seafaring in Newfoundland to Japanese fashion. “I’m always surprised by the creativity of Marlboro students and the diversity in this small community.”

Dana’s book The Development of Soviet Folkloristics addresses Soviet views of peasant and people of color cultures. Since 2000, Dana has worked for the Higher Education Support Program of the Open Society Institute. She chairs the academic committee for OSI’s Regional Seminar for Excellence in Teaching. “Our goal is to promote ‘scholarly teaching’ that engages undergraduate students and promotes democratic change in higher education in the post-Soviet region,” Dana says. “It’s exciting work with international scholars and young academics committed to innovation. It also lets me travel to pursue my research interests in historical tourism and cultural remembrances of war.”

Dana was hired by Marlboro College in 1985.