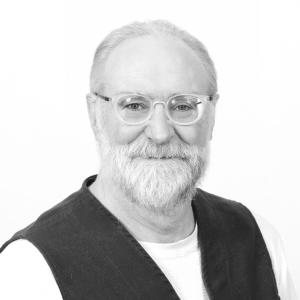 As a teenager in the 1970s, Jim Mahoney taught his calculator to play minesweeper, and he never looked back. As a radio astronomer in the 1980s, he programmed telescopes and modeled galaxies. And in the 1990s, watching the growth of the internet, he set up Marlboro College’s first website. These days Jim tries to connect computer science to various disciplines across the curriculum, including computer music, dance technology, linguistics, digital image and video projects, bioformatics, geographical information systems and scientific data analysis and modeling.

Jim finds that the field of computer science is ideal for interdisciplinary work, and his own interests are a perfect example. “I guess I like best working with students who want to find ways to use a computer to work in other areas—physics, music, dance, whatever—and who put the time in to really dig into things,” he says. “I’ve also had a lot of fun with students who’ve worked just within computer science, with various internet projects or numerical computations.” Jim finds computer science fertile ground for exploring everything from web technology to the nature of thought itself.

Jim’s academic career began with physics, but he has always worked with computers as an important tool, both for various kinds of data analysis and for theoretical work. Over the years, however, his fascination with computers and with programming grew into the place where physics and computer science collide—and where computer science overlaps with other disciplines. In 2002, after teaching physics at Marlboro for 14 years, Jim eagerly filled a vacant position for a computer science professor. Most of Jim’s own research has centered on the internet, including the use of web applications in education. At the 2006 Wikimania, Wikipedia’s annual conference, Jim presented a poster on an academic wiki used by many Marlboro science professors to organize their courses. In 2009, Jim developed a computerized scripting system for dance, another avid interest. For several years, Jim has also worked as an internet consultant, most recently helping the Connecticut Association of Directors of Health develop a “health equity index,”  an online tool charts the relationship between health and wealth demographics. In 2019 he started working on digital machining with the folks at the HatchSpace in Brattleboro.

Jim was hired by Marlboro College in 1988.