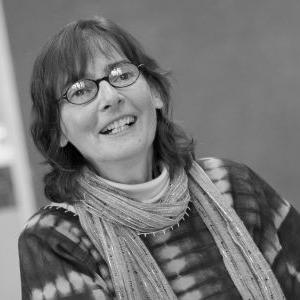 The infectious enthusiasm of politics professor Lynette Rummel builds on her valuable field experience in international, comparative, and area studies. She came to Marlboro following a three-year stint as a Fulbright-Hays lecturer in Tunisia, where she and her husband (also a Fulbright scholar) taught political science. Lynette earned her doctorate in political science from U.C.L.A., taught at Virginia Polytechnic Institute and State University and served as a visiting fellow at the National Center for Atmospheric Research in Boulder, Colorado, working on an African drought research project.

As an undergraduate, Lynette seriously considered enrolling at Marlboro, but instead attended a Midwestern school where she had to fight to develop the kind of customized curriculum for herself that all Marlboro students can take for granted. “What I did with so much difficulty…is what Marlboro is all about,” she says. “That’s why I’m so excited to be here, in an institution that stresses independence and interdisciplinary work.” While Lynette encourages theoretical rigor and sophistication in her students, her own intellectual passion grows out of a commitment to empirical research and fieldwork. “At the bottom line, I hope to help each student not only better understand the world in which they live, but think about what they might do to make a difference as they go forward.”

Lynette’s graduate experience was a mix of political science and African studies. Her master’s work focused on the history and politics of sub-Saharan Africa, with particular emphasis on East and West Africa. For her doctoral dissertation she turned her attention to North Africa, with a study of privatization in Algeria. “My research interests pivot around the questions of global inequality in the world, both economic and political, and for the most part are regionally grounded in Africa and the Middle East,” she says. She recently received a faculty curriculum development grant to conduct research on ethnicity, identity and nationalism in the fledgling nation of Macedonia.

Lynette was hired by Marlboro College in 1993.