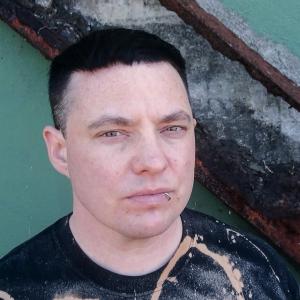 Malic Amalya’s films attend to the emotional impact of attachment and estrangement, and the corresponding political repercussions of alliances and enmities. His work considers how the intimate—including the body, emotions, identity, and relationships—reflects, is informed by, and has the potential to shift cultural perceptions and institutional structures. Malic’s practice is situated between formal avant-garde traditions and the oppositional subculture aesthetics of queercore. Creating single channel and expanded cinema pieces, he works across 16mm, Super 8, digital video, analog video, and 35mm slides. Since 2014, Malic has been collaborating with musician and video artist, Nathan Hill, under the name Vitreous Chamber.

Malic and Vitreous Chamber have had solo screenings with Collectif Jeune Cinema (Paris), Shapeshifters Cinema (Oakland), Microlights (Milwaukee), the Nightingale (Chicago), and the Queen’s Vernacular (Bellingham, WA). Malic’s work has exhibited in both museums and queers bars, including in the Transgender Museum of Art and Herstory exhibition at the Portland Art Museum in Oregon, the Museum of Northwest Art in Washington State, Club SchwuZ in Berlin, Trqpiteca in Chicago, and Other Stranger at the Stud in San Francisco. His films have screened in festivals across the world, including in Festival Les Merveilles (Paris), Light Field Film Festival (San Francisco), MIX Copenhagen, the Scottish Queer Film Festival, Cinema of the Dam’d (Amsterdam), EXiS Festival (Seoul), Onion City (Chicago), the Milwaukee Underground Film Festival, MIX NYC, and the TIE Cinema Exposition (Milwaukee & Montreal). In 2016, his film Magnetic Resonance won an Audience Choice Award in the San Francisco Cinematheque’s Crossroads Artist-Made Film and Video Festival and, in 2012, his film Gold Moon, Sharp Arrow won Best Experimental Film in the Northwest Filmmakers’ Festival in Portland, OR. In 2014, the SF Bay Guardian honored Malic with a GOLDIE Award for Film.

In 2019 to 2020, Malic was Affiliate Artist at the Headlands Center for the Arts in Sausalito, CA. He has been a resident artist at Signal Culture in Owego, New York; the Vermont Studio Center in Johnson, Vermont; and Blue Sky Project in Dayton, Ohio. He has received grants from the Northwest Film Forum and the Jack Straw Studio Center in Seattle to make his 16mm film Drifting, and a Faculty Development Grant from the California College of the Arts to finish his 16mm film RUN!

In curating INFRARED: NEW VISIONS FROM THE QUEER UNDERGROUND, Malic programs a mixture of formal and conceptual work with explicitly politically engaged experimental films from underrepresented queer and trans voices. From 2011 to 2016, INFRARED screened annually at Twist: the Seattle Queer Film Festival. The program also traveled to the Cinema of Gender Transgression at Anthology Film Archives (2019), the Gender in Translation Symposium at the California College of the Arts (2016), Trans-Ocular: New Perspectives in Transgender Art, Media, and Politics at University of Pennsylvania, Philadelphia (2013) and Radically Gay: The Life and Visionary Legacy of Harry Hay at New York University (2012). In 2018, the San Francisco Cinematheque invited Malic to curate a special edition of INFRARED to honor the San Francisco Compton Transgender District, where the Cinematheque offices are located.