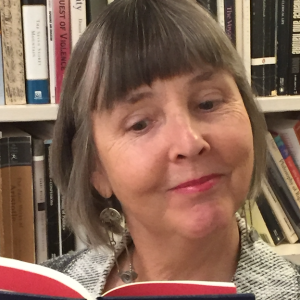 / Home
/faculty-staff-directory Faculty & Staff Directory
Margaret Mott
Address 120 Boylston Street, 5th Floor Boston, MA 02116
Email Email margaret_mott@emerson.edu Telephone 6178248756 Link Website
Everything I know about teaching came from dance classes. First we warm up the argumentative muscles, then we practice specific techniques through using the Commonplace Book, and then we strut our stuff across the floor in contentious debates. Later, I discovered that these basic elements were how American citizens taught themselves the habits of a democracy. Before mass education produced workers for blue-collar and white-collar occupations, these lyceums and schools for "improvement" turned out dynamic debaters and skilled public speakers.

While working as a Court Advocate for a battered women's shelter in the early 1990s, I was forced to confront an uncomfortable truth. Feminism, my one true love, had a dangerously punitive side. As I watched prosecutors use the language of my grassroots movement, I realized that the pendulum had swung way too far to the other side. Women could easily report domestic abuse but once the report was made, they lost all control over the proceedings. First lesson for all political organizers: be careful what you ask for. Second lesson, listen to your opponents. Third, use constitutional principles to stay on track.

Besides teaching undergraduates, I've also developed a series Debating Our Rights on the first ten amendments that brings civil discussions on contentious issues to public libraries and colleges. My opinions on Title IX have been published in Inside Higher Ed, Washington Post, aired on NEPR, and lauded on Breitbart.

Meg was hired by Marlboro College in 1999.