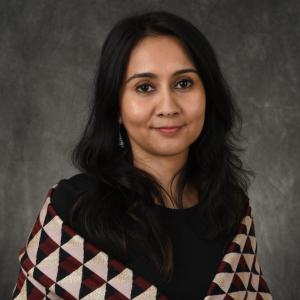 Rituparna Mitra is a postcolonial scholar whose teaching and research interests cover comparative literatures of the Global South, trauma studies, ecocriticism, migration studies, and literary urbanism. Her article “Affective Histories and Partition Narratives in South Asia” was published in The Postcolonial World (2016). Her most recent article "Precarious Duniyas in The Ministry of Utmost Happiness: Life, Death, and Repair in Ruin-Worlds” was published in Postcolonial Studies in December 21. She also has chapters in several forthcoming edited volumes: on rethinking Partition through socio-political and ecological frames in Bangladeshi writer Akhtaruzzaman Elias; on Indo-Islamic performative and listening practices that confound nation-statist borders in Partition lyric poetry; and on tidal urbanisms in the Global South. Rituparna is currently finishing her first book which examines the trauma of displacement and conflict in post-Partition South Asia in conversation with new areas of thought concerning intersections of the human with the non-human, in particular, how the ruptures of displacement enfold landscapes— natural and built. She is developing a second project around the role of death, ruin, and repair in cities of the Global South where debris and detritus often become the site for an emergent community. Rituparna was recently elected to the Executive Committee of the Global South Forum (Comparative Literary and Cultural Studies) of the Modern Language Association. Her essay "Precarious Duniyas in The Ministry of Utmost Happiness: Life, Death and Repair in 'Ruin-Worlds'" won the 2021 Northeast Modern Language Association Postcolonial Essay Award.