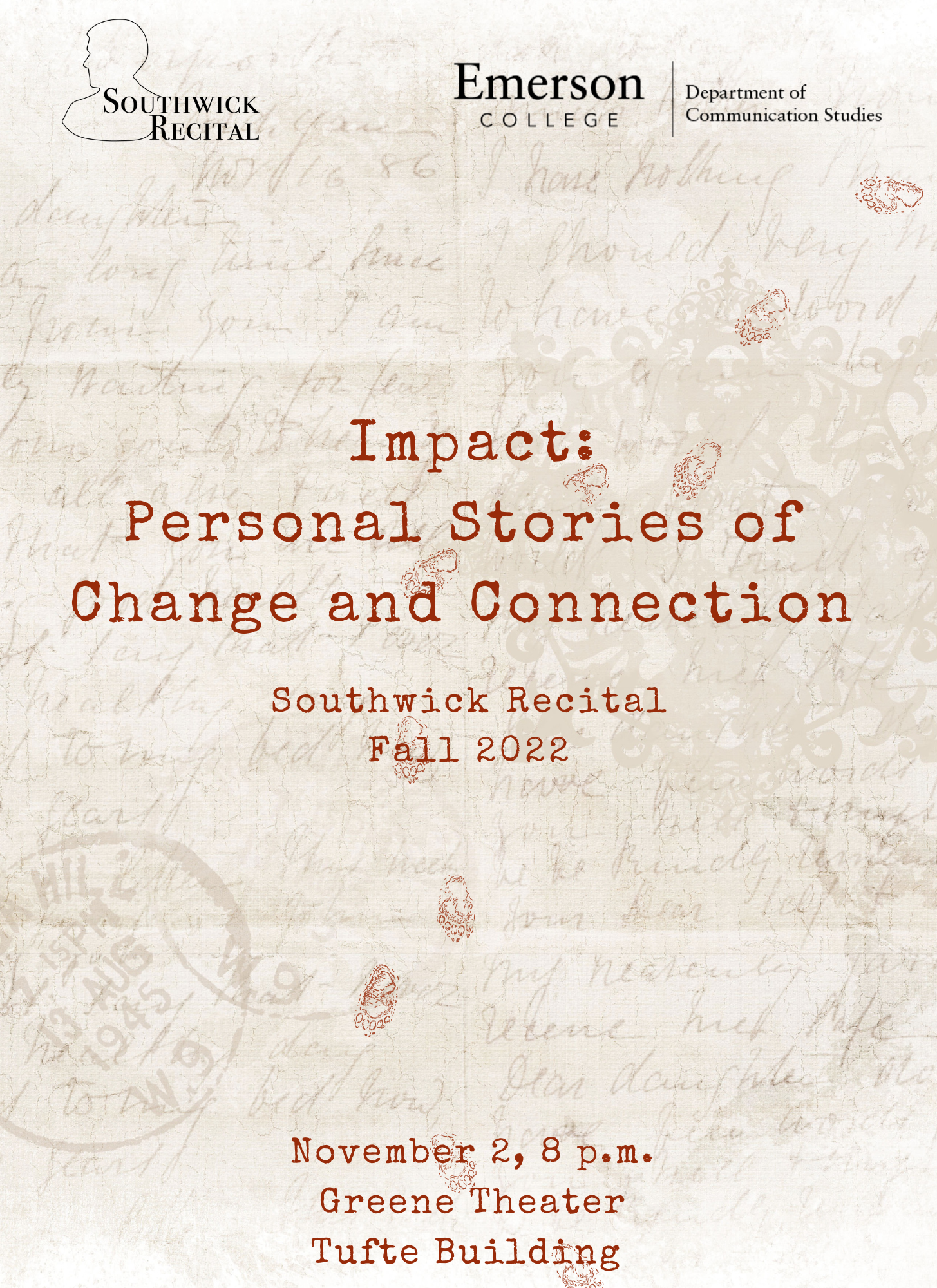 The Southwick Recital—first staged in 1900—has traditionally focused on staged readings of prose, poetry, and dramatic monologue, and celebrates the art of Performance Studies, a cornerstone of the field of Communication Studies. The Southwick both honors the tradition and embraces the future of Oral Communication through literature.

This semester’s iteration of the Emerson tradition is being produced as always by The Department of Communication Studies. For Fall 2022, the department has created an evening celebrating the personal narrative. These stories, crafted and shared by Emersonians, highlight the human experiences that connect us. This Southwick Recital honors that tradition’s roots while making its content and themes more accessible for twenty-first century audiences and more representative of that audience’s diverse voices.

It is important to note that this semester’s event will include adult language and themes and is not recommended for younger viewers.

Henry Lawrence Southwick was a student of Emerson College founder Charles Wesley Emerson from 1895 to 1897, Southwick was a pioneer in educational dramatics. He introduced drama into the curriculum and created The Southwick Recital Series, which still continues more than a hundred years later.

With more than 100 seasons in its history, the Southwick Recital Series is an Emerson tradition and one of the oldest oratory recital series in the United States. The recitals always feature distinguished Emerson faculty, alumni, and honored guest artists performing oral interpretations of literary works (plays, poetry, and short stories), both classic and modern. Founded by Emerson College professor—later president—Henry Lawrence Southwick in the fall of 1900, this recital series quickly became a popular tradition at Emerson and a cherished cultural offering in Boston. 2020 marked the first year that Emerson students were among the presenters at the Southwick Recital, bringing yet another dimension to an already grand institution.

Take a dive into our archives and check out our Southwicks Past.

Fall 2021's Southwick Recital featured two parts, both relating to the topic of dementia and dementia caregivers. Part one was an original personal narrative by Emerson College Communication Studies Department Executive-in-Residence Ken Grout entitled, “Who Was She?” Part two was a discussion panel, whose members used the issues and situations brought up in the narrative as springboards for further dialogue and exploration.

The Southwick was lucky to include Professors Laura Glufling-Tham and Lindsay Griffin of Emerson College’s Department of Communication Sciences and Disorders among its panel members; they joined Professor Greg Payne (Emerson College Communication Studies Chair), advocate and author Katrien Goethals, and caregiver and consultant Judy Johanson.

The event was a reminder that it is the simple act of sharing a personal narrative—one person telling their story to another person—that is at the very core of communication and the work done by the Communication Studies Department.

A student of Emerson College founder Charles Wesley Emerson (from 1895 to 1897), Henry Lawrence Southwick is the founder of the Southwick Recital series.
2 images